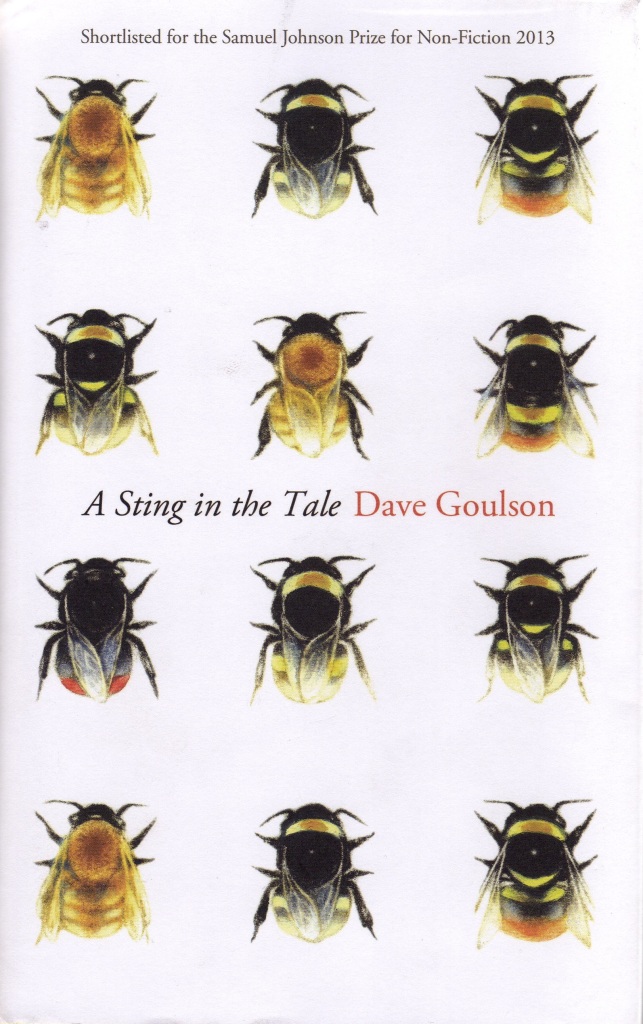 A Sting in the Tale: My Adventures with Bumblebees by Dave Goulson is due out in the United States from Picador at the end of April. By ordering a used copy of the English edition that was printed last year, I was able to jump ahead and read it in advance. Anyone with even a fleeting interest in native pollinators, in habitat loss, in agriculture, or in conservation will want to order this well-written, often-entertaining book. Combining memoir and natural history into a near perfect blend, Goulson gives us tales of tagging and tracking bumblebees, of grad students paired up with bumblebee sniffer dogs, of reintroducing locally extinct populations, all the while giving clear explanations of the science involved and the current research being done. If you’re already a bumble bee aficionado, who perhaps, like my daughter, enjoys watching and petting these big fuzzies while they visit summer flowers, I know you’ll enjoy this book immensely.

In one of the final chapters, Goulson admits to what must be a common frustration for scientists and researchers: “one might find out everything there is to know about bumblebees, and publish it for others to read in scientific journals, but only a handful of other scientists would read it and it would not result in there being one more bumblebee in the world.” Because of his knowledge and the need to get something done, Goulson founded the Bumblebee Conservation Trust, a non-profit charity “for the bumblebees” with the goal of raising awareness of endangered bumblebees and bumblebee conservation among farmers and land managers and gardeners, people in a position to improve habitat and increase the number of bumblebees in the world.

While most of the science and natural history in this book relates to the UK, much of it applies equally well to our North American bumble bees and their conservation needs. (One difference being the spelling of “bumble bee”–the convention seems to be two words here, but a single word in the UK. If we look back more than a century, we find “Humble-bee” in use by Ralph Waldo Emerson and Charles Darwin, because of the hum the bees make when flying). In North America, with one of our native species believed to be extinct, Franklin’s Bumble Bee (Bombus franklini), and numerous other species numbers in alarming decline, it’s obviously time to do something for our bumble bees as well.

Fortunately, many people here in the states have been hard at work protecting bumble bees for some time. The Xerces Society, which has been involved with protecting and raising awareness of native pollinators for many years, has recently helped to launch Bumble Bee Watch, a citizen scientist survey and monitoring project and website. As soon as I learned of this site, I searched through my old photos for some that I could submit. I didn’t find many. Bumble bees are difficult to photograph—they rarely stay still and if they do, their head is buried out of sight in the petals of the flower they are visiting. Out of three years of photos, I was more than a little disappointed to find only four bees to submit. Even still, it was satisfying to make even this small contribution to this wonderful new project.

Last spring, aided by a copy of Befriending Bumble Bees: A Practical Guide to Raising Local Bumble Bees by Elaine Hodges, Ian Burns, and Marla Spivak, I attempted to rear bumble bees. I built the small boxes for the queens, in some ways like match-box size rabbit hutches. Rolled pollen balls. Prepared nectar. Captured and detained four separate queens: one Common Eastern Bumble Bee (Bombus impatiens) and three Two-spotted Bumble Bees (Bombus bimaculatus). None of them nested. I think my mistake was that I didn’t keep the queens in the starter nests warm enough (last spring was not an average spring, resembling rather a two-month extension of winter). When the queens didn’t show signs of nesting, I set them free. Hopefully this year I’ll have better luck coaxing a couple queens into starting a nest. Beyond the satisfaction and entertainment of rearing a colony, it seems useful to pursue the possibility of providing some local farmers with local pollinators.

Earlier this week, yet another bumble bee book landed in my mailbox: the new identification guide Bumble Bees of North America by Paul Williams, Robbin Thorp, Leif Richardson, and Sheila Colla. And while I’ve only just begun to read through the front matter, and flip through the individual species accounts, this surely will be another great asset to anyone working with bumble bees in North America.

So, if you’re still wondering what you can do for bumble bees, I’d recommend digging into any of the books mentioned here during the few weeks left of winter. Then do some gardening, add some native plants that will provide native bees with needed nectar and pollen to your property. If you want to do more, throw some support to The Xerces Society or other organizations conserving needed habitat and start telling others about ways to support native pollinators.

Our always vigilant cat noticed this tiny wasp (6mm in length) on a rug in our kitchen. I believe it belongs somewhere among the Aphid Wasps (Pemphredoninae). The wing venation, the single submarginal cell, is a little curious and doesn’t match any of the illustrations in Bohart and Menke (1976), so I haven’t been able to proceed much farther than the subfamily.

Finding an aphid-hunting wasp in the house in March in Minnesota raises some questions, especially with the snow still piled deeply outside. Being a cavity nester, it could have emerged from some of the stems and galls I have sitting out in my office. That’s one possibility. But, given the porosity of the walls and foundations of this old house, the avenues for a creature this size to enter into our living space are many and, having not seen a living wasp of any kind for quite a number of months, most welcome.

A guide to the Flower Flies (Syrphidae) of Minnesota

A read a day keeps the doctor away

Dragonflies and damselflies of Vietnam

Expand your Knowledge of Insects and the Natural World

Tales of Nature and Photography by Piotr Naskrecki

This WordPress.com site is the cat’s pajamas

Entomology as a Candle in the Dark

Brought to you by the Entomological Society of America